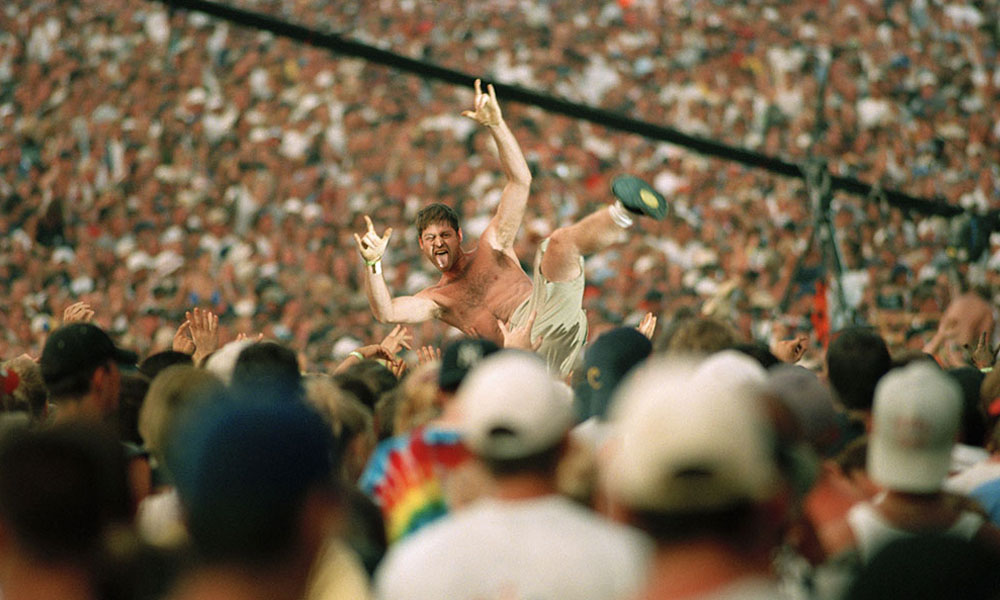 The best 90s songs reveal a simple fact: The decade was a Golden Age for many types of music. Rap and R&B dominated the charts, bringing Black American culture around the world thanks to the prevalence of MTV. Alternative music saw a number of genres proliferate outwards from it in the 90s, like indie rock and emo. Country music took a bold step into the mainstream, and became a defining music of America thanks to a plethora of new stars.

Music from around the world, too, was becoming more popular in America. Jamaican dub and reggae were prevalent in ska and punk music, and Afropop found its way into a variety of genres. Electronic music hit the mainstream with force, as both underground and mainstream acts helped define the dance culture we now see at festivals worldwide. Jazz saw an experimental renaissance after a tough decade, and Latin music started its long ascent to becoming pop music in the United States. The 1990s represented a grab bag of unimaginable wealth for music fans. Here are just a few starting places for you to explore the decade.

Can’t get enough 90s music? Listen to our 90s Music playlist as you read our list of the best songs of the 90s below.

The 90s saw an influx of alternative artists shape the sound of rock music. Gone were the days of hair metal and arena rock. In its stead came artists willing and insistent on changing the rules of the game in favor of something weirder, edgier, and rule-breaking. Female stars like Fiona Apple and Alanis Morissette proved that women not only had a seat at the rock table, they were sitting at the head. Elliott Smith appeared to be the second coming of Bob Dylan, infusing his folk-inspired 90s songs with tales of heartbreak and depression. Jimmy Eat World helped usher in emo music’s ascension within mainstream rock, and Pavement brought slacker cool to campuses across the country. Bands like Foo Fighters and Red Hot Chili Peppers, though, continued to make sure that mainstream rock would continue to be a dominant force in the music industry into the 21st century. For more alternative music, check out our list of the 100 best alternative songs of the 90s.

Elliott Smith – Between the Bars

Mazzy Star – Fade into You

PJ Harvey – Down by the Water

Sheryl Crow – All I Wanna Do

Sublime – What I Got

Weezer – Say It Ain’t So

Country music in the 90s

If country music in the 1980s was adrift, not quite sure of what it was supposed to be, it emerged full force in the following decade as a behemoth, signaling to industry insiders everywhere that the genre was once again on the rise. It foreshadowed the explosion of country in the coming decades, as stars like Garth Brooks and George Strait released some of their best songs in the 90s and newcomers such as Tim McGraw skyrocketed to the top of the charts. Women continued to innovate, too, as acts like The Dixie Chicks and solo stars such as Lucinda Williams and Shania Twain began chiseling the genre in their image.

Dwight Yoakam – Fast as You

LeAnn Rimes – How Do I Live

Shania Twain – You’re Still the One

Travis Tritt – Here’s a Quarter (Call Someone Who Cares)

A number of electronic and electronic-leaning acts changed the course of music in the 90s. Aphex Twin brought a unique perspective that captivated hip audiences previously hesitant to listen to “electronic music.” Plenty of other acts broke through to the mainstream thanks to their pop and rock-leaning styles as well. Moby blended lush, catchy samples with hazy downtempo electronics, and Nine Inch Nails found a middle ground between electronic and acoustic instruments. Stereolab combined French pop with Krautrock to create one of the most unique sounds of the decade, and Portishead used the aesthetics of hip-hop to help introduce trip-hop. Unlike many of the genres in this list, these are songs that could have only been made in the 90s.

Daft Punk – Around the World

Orbital – Halcyon On + On

The rock kids sat in one corner, the alternative in another, and the grunge kids all alone, conjuring ways to highlight the best of both worlds without sacrificing a modicum of originality or artistic license. Grunge was born in Seattle, and bands from the city like Pearl Jam, Nirvana, and Soundgarden brought the heavy guitars prevalent in rock music but blended them with breathtaking vocal performances and a whole lot of flannel. These songs became 90s phenomenons. And the style traveled across the globe, too: Though Radiohead were by no means a grunge band, songs like “Creep” helped popularize the genre in the UK.

The 90s were the Golden Age of hip-hop music for many, and it’s easy to see why. Many of the greatest rap albums in the history of the genre, and many of the best albums, period, of all time, were created during that decade. The list of artists who dropped all-time albums during the 90s is pretty staggering, and it wasn’t limited to a particular coast, either. 2Pac, Snoop Dogg, and Dr. Dre were changing the sound of the West Coast, while a little duo called OutKast were proving that the South had something to say. But the East Coast, particularly New York, was the Mecca of rap in the 90s, headlined by stars like Notorious B.I.G., Nas, Gang Starr, Wu-Tang Clan, and more. For more hip-hop, check out our list of the 100 best hip-hop songs of the 90s.

Sir Mix-A-Lot – Baby Got Back

Will Smith – Gettin’ Jiggy Wit It

Jazz music in the 90s was…weird. The classic heyday of the genre was long gone, and that era was far enough removed from the last traces of jazz’s peak for any nostalgia to remain. But a crop of innovative players helped revive the scene, and pave the way for 21st-century stars like Robert Glasper and Kamasi Washington. John Zorn was an avant-garde mastermind, Matthew Shipp was a fresh-faced innovator, and artists like Henry Threadgill began their ascent to the top of jazz’s peak.

Diana Krall – Peel Me A Grape

Latin music in the 90s

Latin music in the 1990s was highlighted by an American mainstream acceptance of (some) Spanish language music in mainstream pop radio. Shakira, Ricky Martin, and Jennifer Lopez became stars thanks to their authentic and passionate representations of Latin music’s rich history. They helped interpolate the rich history of the genre with pop music, moving their way to the top of the charts as a result. But America wasn’t the entire story regarding Latin music’s ascent. Cidinho & Doca helped showcase a burgeoning Brazilian rap scene, while Spanish pop duo Los Del Rio dominated parties across the world with their hit “Macarena.”

Marc Anthony – I Need to Know

As rock was veering down a number of different paths in the 90s, metal and hard rock music continued to evolve to incorporate genres like hip-hop into heavier leaning rock. Korn, Limp Bizkit, and Rage Against the Machine walked this line effortlessly. Old friends like Ozzy Osbourne continued to build on his illustrious career, and hardcore acts such as Dillinger Escape Plan proved that there was room for something even more challenging.

Death – Voice of the Soul

Deftones – My Own Summer (Shove It)

Korn – Freak on a Leash

Rage Against The Machine – Killing in the Name

Slayer – Seasons in the Abyss

System of a Down – Sugar

Music from (and inspired by) Jamaica

As reggae continued to grow in the United States in the 1990s, different iterations of music from Jamaica made its way stateside as well. Dub and dancehall became celebrated subgenres, and the first hints of reggaeton began to appear as well. Mr. Vegas promoted his style of dancehall music as Filthy Riddim, and Cutty Ranks equated his pre-music career as a butcher to chopping up his enemies lyrically. And one of the best songs of the 90s, full stop, emerged with Chaka Demus & Pliers’ anthem, “Murder She Wrote.” Elsewhere in the scene, Beres Hammond infused his style of reggae with the feel of romantic ballads.

Beenie Man – Who Am I

Songs from (and inspired by) Africa

African music continued to become a power player in the worldwide ecosystem in the 1990s, with superstars like Ali Farka Toure working with legendary American polymath Ry Cooder. Angelique Kidjo, meanwhile, became a sensation in her home country in Benin and around the world thanks to her thrilling blend of Afropop with R&B and soul music. Elsewhere, Baaba Maal brought Senegalese folk music to a wide, adoring audience.

The Master Musicians Of Jajouka – Gabahay

While music from Japan was growing in influence in the 1980s, it took a massive leap forward in the 1990s as artist such as Cornelius began finding audiences outside of the country. FISHMANS brought an incredible blend of Japanese pop music with Jamaican-inspired dub, while ORIGINAL LOVE helped establish J-pop as a force to be reckoned with.

Shonen Knife – Top of the World

Pop music in the 90s

Though genres like indie rock and grunge became mainstays during the 1990s, the behemoth that is pop music still dominated the charts and the cultural zeitgeist during the decade. Britney Spears was arguably the biggest star on the planet when she first emerged, and Spice Girls were doing something similar across the pond. Madonna was still churning out hit after hit, and inspiring a new generation of stars such as Christina Aguilera. Celine Dion turned a soundtrack cut from Titanic into one of the biggest songs in the history of film music, and Backstreet Boys dominated the boy band circuit, helping to pave the way for groups like One Direction and BTS.

Backstreet Boys – I Want It That Way

Celine Dion – My Heart Will Go On

Christina Aguilera – Genie in a Bottle

Hootie & The Blowfish – Hold My Hand

Sinead O’Conner – Nothing Compares 2 U

The triumvirate of punk, hardcore, and ska helped to provide an alternative to mainstream rock and metal during the 1990s. Blink-182 masterfully blended pop hooks with playful, sneering lyrics and fast punk grooves, while Sublime married their obsessions with punk and Jamaican music. Swedish hardcore band Refused helped shape the future of punk, blending hardcore rhythms with unforgettable melodies. No Doubt proved that punk could still have pop sensibilities, and NOFX merged the parallel paths of punk music and skate culture.

No Doubt – Just a Girl

The Mighty Mighty Bosstones – The Impression That I Get

The Offspring – The Kids Aren’t Alright

Just like its hip-hop sibling genre, R&B had a bounty of great songs during the 90s. The list of superstars emerging in the R&B lane are too many to name, but Aaliyah, Mariah Carey, and Mary J. Blige blended pop ballads with lush, R&B-inspired instrumentals, bringing a groundbreaking style to the genre. TLC mashed up lush vocals with stellar bars, giving R&B a rap edge it had previously lacked. Blackstreet helped revive New Jack Swing late in the decade, while D’Angelo was among those pioneering neo-soul along with many others.

Aaliyah – Are You That Somebody

Brandy and Monica – The Boy Is Mine

Brandy – I Wanna Be Down

En Vogue – My Lovin’ (You’re Never Gonna Get It)

Faith Evans – Soon As I Get Home

Keith Sweat – I Want Her

New Edition – If It Isn’t Love

Seal – Kiss From a Rose

Usher – You Make Me Wanna

Think we missed some of the best songs of the 90s? Let us know in the comments below. Listen to our 90s Music playlist here. 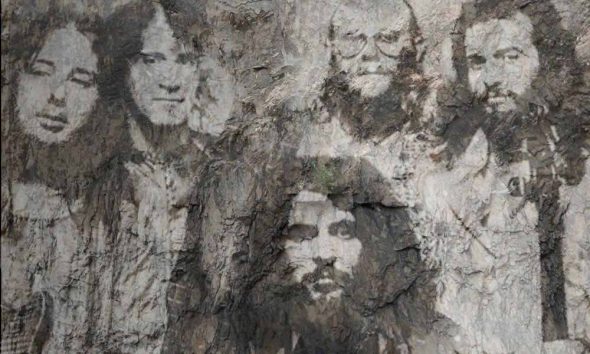 In Search Of The Forgotten Heroes Of 70s Rock